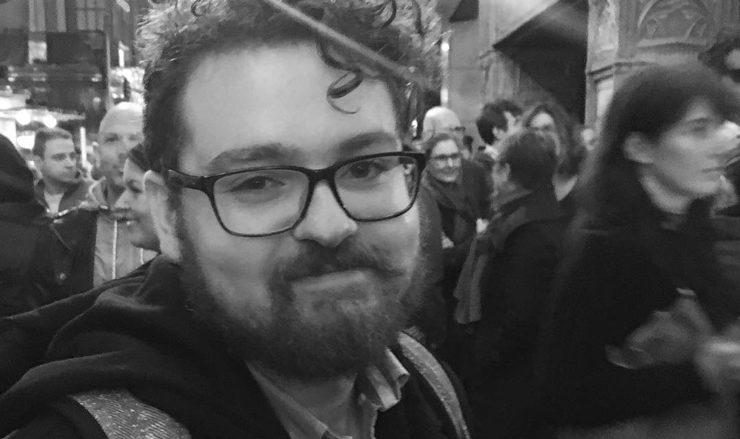 Our latest QFF Top 5 comes from Conor Bateman. Conor is the managing editor of 4:3, an independent film website with a focus on festival coverage and in-depth interviews. QFF was fortunate to have 4:3 cover our first festival in 2015. Conor is also a freelance writer and video essayist, with work published in Fandor, Keyframe, The Lifted Brow and Empire Magazine. Check out his Top 5 picks for QFF2016:

One of the best new films I’ve seen all year is the latest from Athina Rachel Tsangari, the hilarious Chevalier. Following up her 2010 feature Attenberg, which focused on a young woman’s unique coming of age experience amidst her father’s dying days, Tsangari changes tack almost completely, chronicling the absurd competitiveness inherent in a patriarchal society. Six men on a yacht off the coast of Greece challenge one another in a series of competitions (best sleeping posture and a literal dick-measuring contest among them) in order to find out who among them is the “best in general” yet the film never feels one-note, with a sly political commentary more clearly emerging in the film’s final act.

Bring Me The Head of Tim Horton

Guy Maddin and Evan Johnson had to follow-up the fantastical The Forbidden Room somehow. The fetishistic approach to early cinema in that film found new life in the NFB’s interactive web project Seances, with Maddin, Johnson and Galen Johnson (who was responsible for The Forbidden Room’s production design and opening credits) instead taking on the war film with Bring Me The Head of Tim Horton. It’s a behind-the-scenes documentary on Paul Gross’ 2015 drama Hyena Road in premise alone, with Maddin as wandering protagonist, a green screen trailing him. That’s about all I know. I’m yet to see it but based on the enthusiastic response from its screening in the lobby of a cinema in New York, it should prove to be one of the funniest films played this QFF.

I always confuse Ben Russell and Ben Rivers. That’s worth stating at the outset. The two experimental filmmakers collaborated on 2013’s A Spell to Ward Off the Darkness and their respective short-form works have similarities: shot on 16mm, slipping into ethnographic studies. Rivers is more interested than Russell in the mess of fact and fiction, his striking feature Two Years at Sea marking him a longform talent to watch. The Sky Trembles, in addition to having the second best title of the festival (Maddin strikes again), looks set to continue his streak.

A short from Rivers, A Distant Episode, also screens at QFF this year.

The festival’s retrospective programming this year is eclectic and exciting, Agnes Varda sitting alongside Czech epic Marketa Lazarová sitting alongside the master of Canadian body-horror, David Cronenberg. Ostensibly picked because of its link to The Sky Trembles through their shared references to author Paul Bowles, Cronenberg’s Naked Lunch is a hallucinatory trip through the work of William S. Burroughs starring Peter Weller (Buckaroo Banzai himself) and our own Judy Davis. Not only is it one of the most impressive works of literary adaptation in decades, it also features some of Cronenberg’s best and most disturbing practical effects (I see your Videodrome television and raise you a Naked Lunch typewriter).

It’s almost a given now that if a film appears in the Film Society of Lincoln Center’s New Directors/New Films screening series then it immediately becomes one of the must-see films on our local film festival circuit (2015: Court, Haemoo, Tu dors Nicole among them). Though Sydney wasn’t able to secure the debut feature from Bi Gan, Queensland has come through. “A narrative shape-shifter featuring a 40-min long take and set in a small town steeped in mystery” is all I need to hear to book this one in. It looks to be not just a singular work in this year’s program but a singular work in contemporary Chinese cinema.