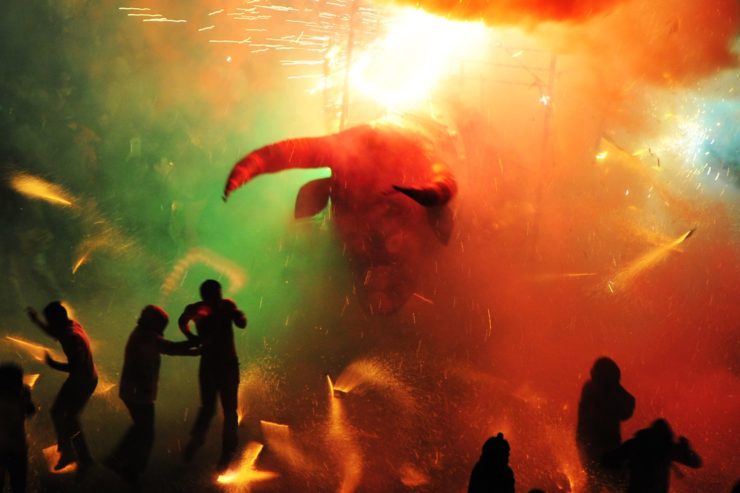 Shot over three years, “Brimstone” is less a rigorous verite chronicle than a semi-ethnographic visual tone poem, one that occasionally abandons all pretense of storytelling to simply revel in the sheer artificial beauty at hand. Some montages are utterly hypnotic in their color and clarity, none more so than the “cosmic” shots of abstracted exploding fireworks captured at 1,500 frames per second by DP Tobias von den Borne on a high-speed camera. – Dennis Harvey, Variety

Tultepec, Mexico: a small town and the centre of Mexico’s fireworks industry. Every year the town holds the National Pyrotechnic Festival in honour of John of God, the patron saint of firework makers. The festival lasts a week, is a major tourism drawcard, and is structured around two core events: the contest of the castillos, and the pamplonada. The castillos are castles handmade from wood and fireworks that are then lit; the pamplonada sees teams construct large wheeled bull statues, covering them in fireworks before lighting them and driving them amidst crowds. Brimstone & Glory covers both the preparation and execution of this festival.

Literal description captures nothing of the ecstasy of this film. Expertly lensed by Tobias von den Borne, Brimstone & Glory is one of the year’s most beautiful films, capturing both the swirling, writhing beauty of the fireworks and their impact on the Dionysian crowds, writhing amidst sparks as police cower. Shot over three years, this impressionistic documentary is a stunning debut from Vikor Jakovleski.