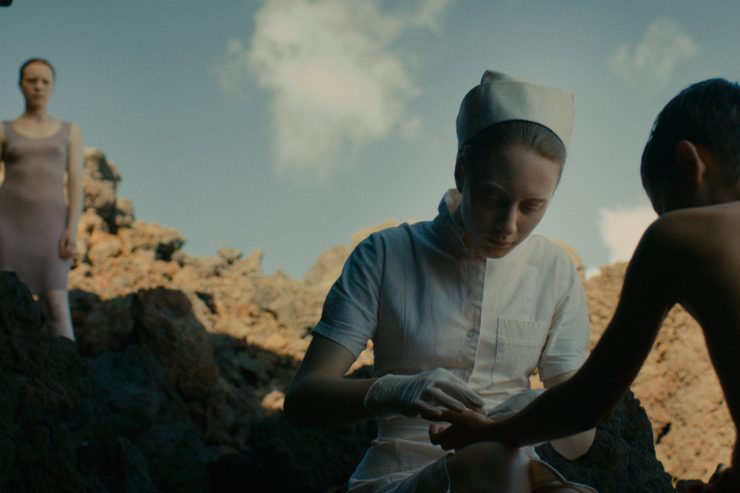 Evolution is tender and horrific, glacial and forlorn, but without doubt provocative, stimulating and imaginative in its take on gender roles. Hadžihalilović messes around with nature and rifts birth from motherhood in order to question both, in a story where boys’ coming of age is rendered female, as they are physically probed, coerced and violated. – Mar Diestro-Dópido, Sight & Sound

10-year-old Nicolas lives with his mother on a remote island, in a village inhabited solely by women and young boys. In a hospital overlooking the ocean, the boys are subjected to a strange medical treatment, but only Nicolas questions what is happening around him. He senses that his mother is lying to him, and is determined to find out what she does with the other women she meets on the beach each night. What he discovers is the beginning of a nightmare into which he is helplessly drawn; however in Stella, a young nurse at the hospital, Nicolas finds an unexpected ally.

Filmed on the alien islands of Lanzarote by noted cinematographer Manuel Dacosse (The Strange Colour of Your Body’s Tears, QFF 2015), Evolution is Lucile Hadžihalilovic’s long awaited follow-up to her debut, Innocence. A fable touched by horror, Evolution is Hadžihalilovic’s latest exploration of wonder, gender, and social conditioning.

Winner of Best Cinematography at the 2015 San Sebastian and Stockholm International Film Festivals.