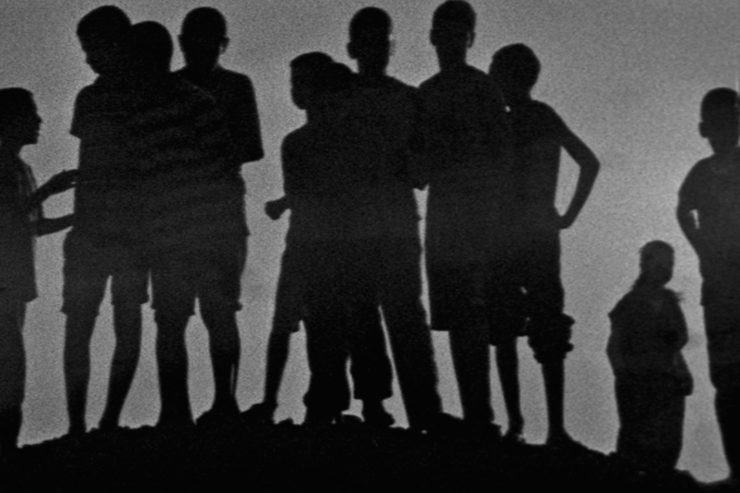 Extended descriptions of the local, experimental, and animated shorts being screened as part of QFF2016.

A Distant Episode
Ben Rivers | 2015, 18 minutes | Screens prior to Sector IX B
A meditation on the illusion of filmmaking, shot behind the scenes on a film being made on the otherworldly beaches of Sidi Ifni, Morocco. The film depicts strange activities, with no commentary or dialogue. It appears as a fragment of film, dug up in a distant future — a hazy, black and white, hallucinogenic world.
HD Courtesy of LUX and Ben Rivers

Double Portrait
György Kovásznai | 1965, 7m | Screens as part of Remembering BFF
Animation. The relationship between a man and a woman is marked out by the shift of their portraits from one style of representation to another.
16mm Courtesy of NFSA

The Freestone Drone
George Barber | 2013, 13 minutes | Screens prior to Ennui Ennui and Bring Me the Head of Tim Horton
Unmanned Aerial Vehicles — drones — have become an everyday feature of contemporary military activity, replacing humans in reconnaissance flights, small-scale combat missions and covert operations. Comprised of George Barber’s three video projections, an array of domestic objects and numerous washing lines, The Freestone Drone follows a mission from the point of view of the machine. The video combines found and made footage to produce an uneasy, seductive montage, anchored on the drone’s private thoughts.
DCP Courtesy of Lux and George Barber

The Limited
Christopher Elena | 2016, 11 minutes | Screens prior to The Silences
When three schoolboys lampoon the death of a gay classmate, their laughter is overheard by an unseen eavesdropper. One of them earns a detention for this wrongdoing, and the ensuing conversation with the deceased’s mother takes on an eerie and haunting tenor. Shot on a vintage 16mm film stock that lends the film its soft, autumnal colours, The Limited is a suggestive ghost story of great beauty.
DCP Courtesy of Christopher Elena

MQ-9 Reaper I
Baden Pailthorpe | 2014, 5 minutes | Screens prior to Fort Buchanan
A renovated drone control centre is redeployed from the ground to the air over a mountainous Afghan-American landscape, offering a new kind of luxury for the drone operator/corporate warrior, complete with marble floors, leather couch and cutting-edge contemporary war art. The hydraulic wall can be lowered for entertaining, personal training or surveillance. The slowly rotating unit allows for panoramic views and constant situational awareness (SIT-AND-AWE).
This speculative, controller architecture is cut with images of that which it controls. Two incarnations of the MQ-9 Reaper drone, the classic General Atomics USAF model, and its own idealised reflection contemplate each other and their increasing sense of semi-autonomous agency.
DCP Courtesy of Baden Pailthorpe

Nectar
Lucile Hadžihalilović | 2014, 18 minutes | Screens prior to Evolution
A round chamber in a park, where five women perform a ritual they know well. The queen gives her nectar, yet a new cycle is already under way. Nectar acts as a bridge between the bucolic daylight of Lucile Hadžihalilović’s earlier Innocence, and the nocturnal nature of her latest, Evolution.
DCP Courtesy of De Films en Aiguille

On Air
Laurent Grasso | 2009, 9 minutes | Screens prior to Ennui Ennui and Bring Me the Head of Time Horton
Flying over remote, mysterious sites in the United Arab Emirates, a falcon films that country’s lunar desert landscapes, fitted with a tiny camera that transforms a traditional form of hunting into an espionage tool or primitive spy evoking a living drone in a conflict zone.
DCP Courtesy of Edouard Malingue Gallery and Laurent Grasso

Towards the Possible Film
Shezad Dawood | 2014, 20 minutes | Screens prior to Sector IX B
Towards the Possible Film is a study in parallel universes, and the sparks that fly when worlds collide. As much of a projection into a far-off future as a flashback to a long-forgotten past, Shezad Dawood’s vivid 20-minute tableau combines the resonance of a mythic fable with the hallucinatory haziness of a waking dream. A slow, tense standoff evokes those pivotal moments in colonial history when isolated civilisations first make contact, as well as other alien encounters beloved of science fiction. Less a meeting of minds than a clash of cosmologies, a further layer of complexity is added by an intermittent monologue delivered in the Berber dialect of Tamazight — a language undergoing a revival in modern Morocco, and whose origins are both ancient and unknown.
HD Courtesy of LUX and Shezad Dawood

Red and Black
Witold Giersz | 1964, 7m | Screens as part of Remembering BFF
Animation. Red and Black are pitted against one another, first in the bullring, and then in the studio.
16mm Courtesy of the NFSA

Robert Klippel – Metal Construction, 1960
Arthur and Corinne Cantrill | 1964, 5m | Screens as part of Remembering BFF
One of five studies by the Cantrills on the noted Australian constructivist sculptor Robert Klippel. This is an abstract piece drawn from an examination of one of Klippel’s smaller works formed from steel rods and copper planes. The striking music, derived from electronically manipulated percussion and vocals, is by Larry Sitsky.
16mm Courtesy of The Cantrills

Robert Klippel – Junk Sculpture, 1964
Arthur and Corinne Cantrill | 1965, 5m | Screens as part of Remembering BFF
One of five studies by the Cantrills on the noted Australian constructivist sculptor Robert Klippel. This is an abstract piece drawn from an examination of one of Klippel’s larger metal works. With striking music by Larry Sitsky.
16mm Courtesy of The Cantrills

Strudel Sisters
Peter Hegedus and Jaina Kalifa| 2016, 7 minutes | Screens prior to The Silences
Sisters Ilona and Erzsébet share the tradition of making Hungarian strudel. While performing this delicate act, they reminisce about their beloved mother, revealing a deep family story and the unique bond cultivated in sisterhood.
DCP Courtesy of Peter Hegedus and Jaina Kalifa.

Syrinx
Ryan Larkin | 1965, 3m | Screens as part of Remembering BFF
Animation. A nymph flees from the satyr Pan. Ryan Larkin’s debut and a key example of his textured and detailed approach to animation.
16mm Courtesy of the NFSA

Image from A Distant Episode. Courtesy of LUX and Ben Rivers