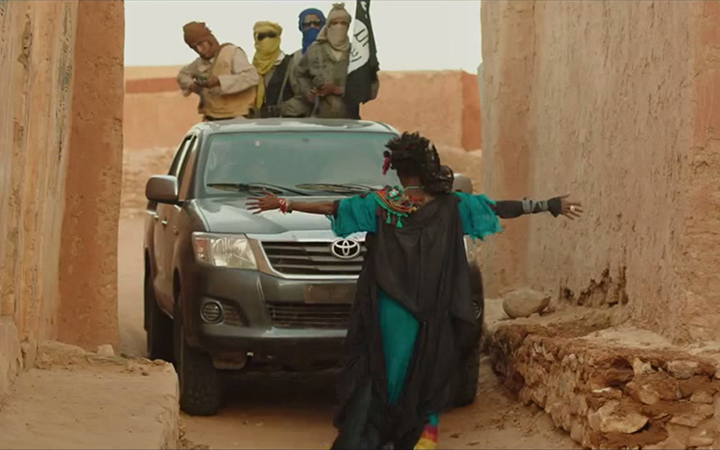 Timbuktu tells us that the other is just like us, though on a perverted path, and that all is not lost. There’s hope for humanity yet. – Alexis Okeowo, The New Yorker.

Set in the eponymous Malian city and loosely based on its nine-month occupation by Jihadists in 2012, Timbuktu observes the seizure unfold. The central narrative tells the story of a family who are propelled into a journey of hope and despair after the killing of their prized cow. Mauritanian director Abderrahmne Sissako navigates the crisis through a series of anecdotes enacted by a predominantly amateur cast.

Combining brilliant visuals with a fearless expression of humanity as morally complex and fragile, Timbuktu provides texture and accessibility to an otherwise incomprehensible situation. Confirming Sissako’s international standing as a humanist filmmaker, Timbuktu awakens Western audiences, for whom the city is emblematic of the far-away and exotic, to the moral and religious conundrums faced by the real people who live there.

Timbuktu was winner of the François Chalais Award and Prize of the Ecumenical Jury at the Cannes Film Festival, and received a 2015 Oscar nomination for Best Foreign Language Film.

This screening was made possible thanks to the support of Alliance Française and the French Embassy of Australia.

6.30pm: Drink and canapés on arrival