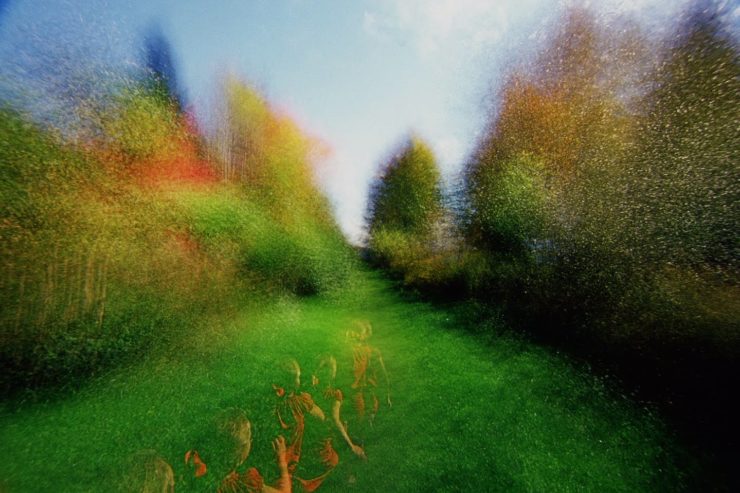 A screening of short films co-curated by Caitlin Franzmann and John Edmond as part of Franzmann’s Artist Residency at Karawatha Forest. This free screening, Half-Moon, explores our relationship with nature: in wonder, memory, contemplation, or our lasting impact on the world. Children friendly.

Brouillard – passage #14
Alexandre Larose, 2013 | 10 minutes
Filmed by repeatedly walking along the same path, exposing each trip over the same roll of film, Larose has transformed his journey from family backyard to Lac Saint-Charles into a radiant depiction of memory—a vision of sparkling impressionistic intensity.
HD Courtesy of Light Cone

A River Twice
Audrey Lam | 2017, 15 minutes
A father and his daughter plan a sailing trip; his daughter sails down a creek alone. Brisbane filmmaker Audrey Lam’s latest short is a miracle of contemplative dovetailing editing, as present, narration, conversation and the past become one.
HD Courtesy of Audrey Lam

The Wold Shadow
Stan Brakhage | 1972, 3 minutes
A stand of birches. Sunlight brightens and dims, revealing more or less of the woods. A little grass is on the forest floor. Is there a shape in the shadows? Something green is out of focus. The light flashes, and the screen goes dark from time to time. We look up close at the bark of trees. Is the god of the forest to be seen?
HD Courtesy of NFSA

I Know Where I’m Going
Ben Rivers | 2009, 29 minutes
“What would be left of human action, human traces, human constructions, human buildings and wider ripple effects of humans after that length of time…assuming, that humans disappear in the geologically near future.”
A fragmented road trip through Britain on the peripheries. Down empty roads, off in the wilderness, a few lone stragglers. My first stop was with Jan Zalasiewisz, a geologist who had been trying to imagine the Earth in one-hundred million years, which seemed like as good a start as any.
HD Courtesy of LUX

Luna Almanac
Malena Szlam | 2013, 5 minutes
Lunar observations shot frame-by-frame and long exposures on hand processed 16mm Ektachrome film create a chronicle of the lunar phases. Through their layering, the filmmaker emphasizes that the observer, burdened by memory and changing frames of view, moves along a non-linear time-plane.
HD Courtesy of Malena Szlam

The discovery centre is easy to get to by public transport. Take the train to Trinder Park Station and walk along Acacia Road or through the forest to the centre. Car access via 149 Acacia Road.