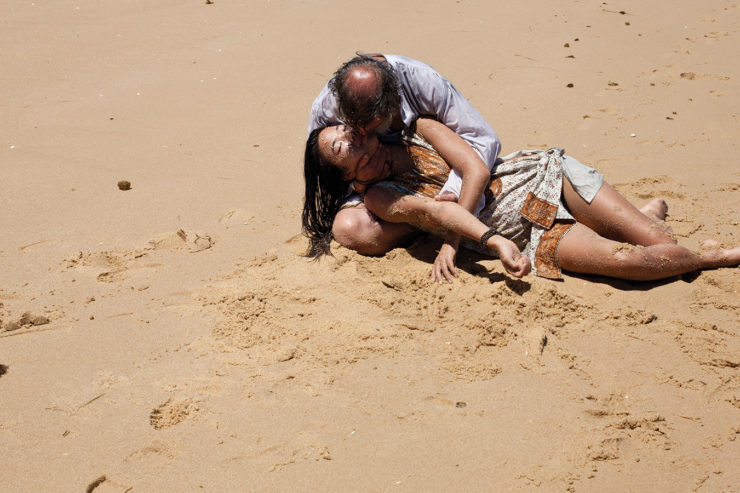 With its freewheeling lasciviousness and impetuous logic firmly established, it’s unsurprising that [Taprobana] eventually finds Camões on trial in purgatory, deliberating on a life of divinity versus damnation as crude visual effects ignite in a display of meta-cinematic immolation. – Jordon Cronk, Senses of Cinema

Presented as a partnership between Queensland Film Festival and the Institute of Modern Art, this free screening, Historical Bodies, charts the history of Portugal’s sexual and political relationships inscribed through corporeal bodies.

On the Dragon’s Flake | Ivo M. Ferreira 2012 | 23 minutes
A reporter and a camera operator from a Macau TV channel embark on a journey to the south of China in order to unravel the sinking of a 12th century Chinese junk, contemporary of the sinking of the galley of Don Fuas Roupinho, admiral of the fleet of Dom Afonso Henriques, First King of Portugal.
Courtesy of AGÊNCIA – Portuguese Short Film Agency

Taprobana | Gabriel Abrantes 2014 | 23 minutes
In this short comedy, Luís Vaz de Camões, the greatest Portuguese renaissance poet, struggles creatively while engaging in a hedonistic, coprophagic, and drug addled lifestyle. Gabriel Abrantes’s (QFF2016, Ennui Ennui & The Hunchback) film follows the poet, and his lover Dinamene, as he writes his masterpiece, his epic The Luciads, a fantastic poem that tells of Portugal’s voyages of discovery and colonialism. He travels from the cacophony of the Indic jungles, surrounded by allegorical elephants and rhyming macaques, to the frontier of Heaven and Hell, where he is confronted by his fantasy: fame and immortality.
Courtesy of Gabriel Abrantes and Hermaphrodite Films

The King’s Body | João Pedro Rodrigues 2012 | 32 minutes
What would it look like, the body of Dom Afonso Henriques, first king of Portugal, tutelary figure, subject to successive mythifications throughout Portuguese history? Or, João Pedro Rodrigues (QFF2017 The Ornithologist) holds a casting call for body builders to play the role of King Afonso, making them recite what they know of the King, his life, and then their lives—creating an acute series of portraits of life under contemporary Portuguese austerity.
Courtesy of AGÊNCIA – Portuguese Short Film Agency