Home » Jeannette: the Childhood of Joan of Arc 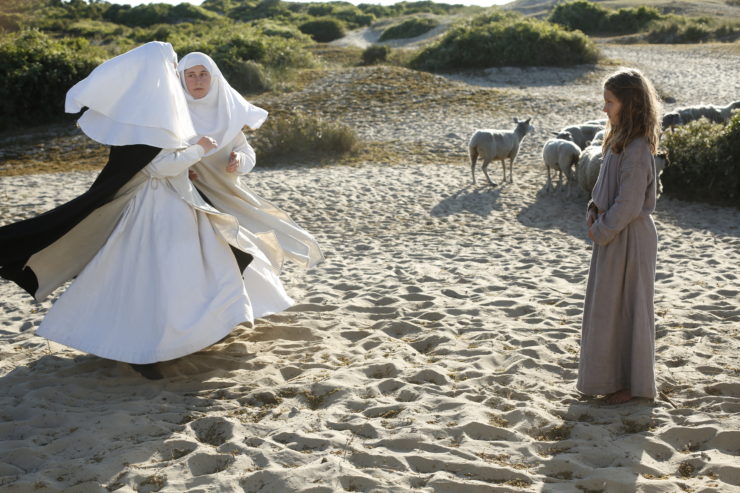 Jeannette, the Childhood of Joan of Arc… one of the true UFOs I have encountered in my ten years of Cannes attendance. So aberrant and ruthless is its pursuit of new forms of poetry, luminance and madness that it can be (and very much has been) confused for cretinism itself. – Blake Williams, Filmmaker

France, 1425. In the midst of the Hundred Years’ War, the young Jeannette, at the still tender age of 8, looks after her sheep in the small village of Domremy. One day, she tells her friend Hauviette how she cannot bear to see the suffering caused by the English. Madame Gervaise, a nun, tries to reason with the young girl, but Jeannette is ready to take up arms for the salvation of souls and the liberation of the Kingdom of France. Carried by her faith, she will become Joan of Arc. A musical by Bruno Dumont.

A joyful and perverse musical in which metal headbanging evokes religious self-flagellation, Dumont’s (P’tit Quinquin, QFF2015) deeply powerful work can be seen as a silly, funny, ludicrous film, and rightly so. But it can also be taken as a serious work. Devote atheist Dumont has rigorously adapted the tormented Catholic Charles Péguy’s Le mystère de la Charité de Jeanne d’Arc (1910), a philosophical play in which each character represents an ideology—whether the devil, family or the orthodox church—and tests little Jean with the limits of her belief. Like a flame quivering in the wind, Jeannette flickers between both modes, illuminating us all.