Home » And the Plants Have Time For Us 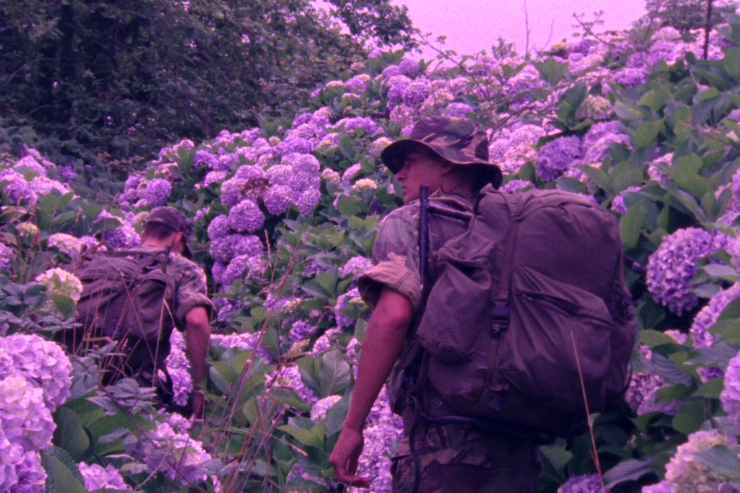 Flores
Jorge Jácome | 2017, 27m
In a natural crisis scenario, the entire population of Azores is forced to evict due to an uncontrolled plague of hydrangeas, a common flower in these islands.
Two young soldiers, bound to the beauty of the landscape, guide us to the stories of sadness of those forced to leave and the inherent desire to resist by inhabiting the islands of this gentle apocalypse. Hushed and infused with purple, Flores is a nostalgic and political reflection on territorial belonging and identity, and the roles we assume in the places we came from.
Courtesy of the Portuguese Film Agency

The Social Lives of a Tree
Lonnie van Brummelen & Siebren de Haan | 2015-, 23m
A documentation of the production of museum bench by Suriname Maroon people using local tropical hard wood. Two of the woodworkers are from the Arawak tribe, Mr. Alwin Sabajo and Mr Sege Lingori, and one from the Warao tribe, Mr Jerome Doyle.

In western industrial conditions, materials arrive refined, ready-to-use, purified from its context. Elsewhere, materials are not disconnected. It is part of a mixture, an entangled and living organism. The three men cut a tree in the rainforest and carved it into a museum bench in turtle shape, in the way that their ancestors taught them. The bench was partly burned in charcoal to created a distinct black pattern. They used the dried skin of a ray fish to sand the turtle’s surface smooth. The Arawak also demonstrated how the fish skin could be attached to a sanding machine, to speed up the process.

The original iteration of The Social Lives of a Tree also included a plaster bench to watch the work from. The original bench provided a mould before being donated to a Suriname museum at the request of the woodworkers.
Courtesy of Lonnie van Brummelen & Siebren de Haan

Touching the Mauri (‘body’ only)
Merri Randell | 2018, 8m
The journey of ‘Touching the Mauri’ travels from Peru to Hawaii, to New Zealand and back to Australia, blending magical landscape creation story myths from a childhood in a rural Anglo Māori Australian Mormon household to fold time on itself.
Courtesy of Merri Randell.