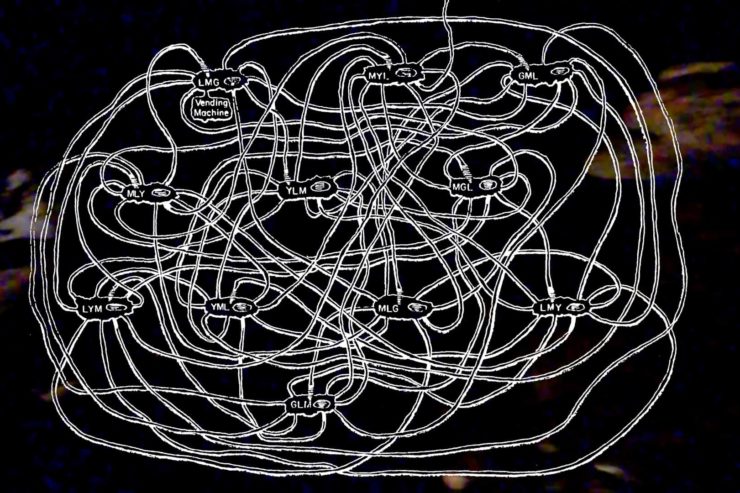 Presented as a partnership between Queensland Film Festival and the Institute of Modern Art, this free screening, Speleogenesis, uses the metaphor of cave formation to explore how relationships are built across structures and systems.

This screening is a free event; all welcome! Please RSVP to secure your spot through Eventbrite.

Films will commence at 3:15pm.

Pattern Language
Peter Burr 2017 | 10 minutes
‘Pattern language’ is a term coined by architect Christopher Alexander to describe the existence of certain human ambitions through an index of structural patterns. In this film, highly organised and richly layered patterns move in accordance with audio frequencies and rhythms, towards the construction of an endlessly mutating labyrinth. Courtesy of Peter Burr.

Thing
Anouk de Clercq 2013 | 18 minutes
An architect talks about the city he built. We travel through his virtual memory to a boundless, imaginary space. About a place’s memory, about fictitious buildings and the continuation of the past in today’s urban patterns.
In previous works, Anouk De Clercq has drawn on the pixel, what might be called “the smallest unit” that makes up the digital image. In Thing, it is no longer about the pixel, but rather about the dot, or more accurately, about the scale interplay between the dot and its multiplication and organisation in the digital image and space.
Thing, is a film that is built from a text that progressively describes, creates, or builds a space. The dot and the word become thereby, parallel compositional elements.
Derived from an edit of the words of Anna Manubens. Courtesy of Anouk de Clercq and Auguste Orts.

Colossal Cave
Graeme Arnfield 2017 | 11 minutes
Plato’s allegory of the cave is often read as a prefiguration of cinema. Yet this film illustrates how online gaming was born from a network of caves. The reconstruction of one couple’s hobby, spending all their time in the world’s largest cave system, leads us to the conception of a pioneering video game. Courtesy of Graeme Arnfield.

Entangled
Riccardo Giacconi 2014 | 37 minutes
In quantum physics, if two particles interact in a certain way and then become separated, regardless how distant they are from each other they will share a state called ‘quantum entanglement’. That is, they will keep sharing information despite their separation. This theory used to upset Einstein. In his theory of relativity, no transmission of information could occur faster than the speed of light, therefore he couldn’t understand how the two particles could be simultaneously connected.