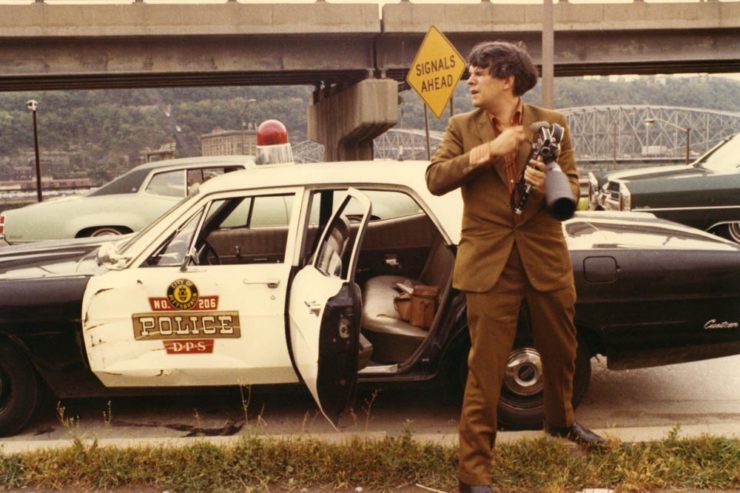 This free screening of The Pittsburgh Documents is presented as a partnership between Queensland Film Festival and the Institute of Modern Art.

In a career loaded with countless visionary works, Brakhage’s The Pittsburgh Documents (often called The Pittsburgh Trilogy) are a trio of acknowledged masterworks, and represent a radical approach to the concept of a cinematic document (as opposed to documentary) rooted in subjective observation. By training his eyes and the film medium on three subjects he felt were elusive, inscrutable, even fearful in their universality, Brakhage sought to gain some empathic foothold–if not an understanding–in these realms of authority (police), illness (hospital) and death (morgue). – UCLA Film & Television Archive

Eyes (35m)
An extended silent film poem about the Pittsburgh police force. Brakhage follows the events of one night in a patrol car.

Deus Ex (33m)
Brakhage drew on the experience of time spent ill in hospital to create a visionary film inspired by Charles Olsen’s poem ‘Cob’s Island’ which begins ‘I met Death/He didn’t bother me or say anything’.of impressionistic glimpses filmed with a documentary concern for the specifics of the experience of hospitalization. Brakhage describes heart surgery as ‘equivalent to Aztec ritual sacrifice … the lengths men go to avoid so simple and straightforward a relationship with Death as Charles Olsen managed on/in Cob’s Island’.

The Act of Seeing With One’s Own Eyes (1971 32m)
An extended silent film ‘poem’ about an autopsy performed in a coroner’s office in Pittsburgh. “Brakhage enters with his camera, one of the forbidden terrific locations of our culture, the autopsy room”—Hollis Frampton.

Introduced by Dr Alison Taylor, author of Troubled Everyday: The Aesthetics of Violence and the Everyday in European Art Cinema.