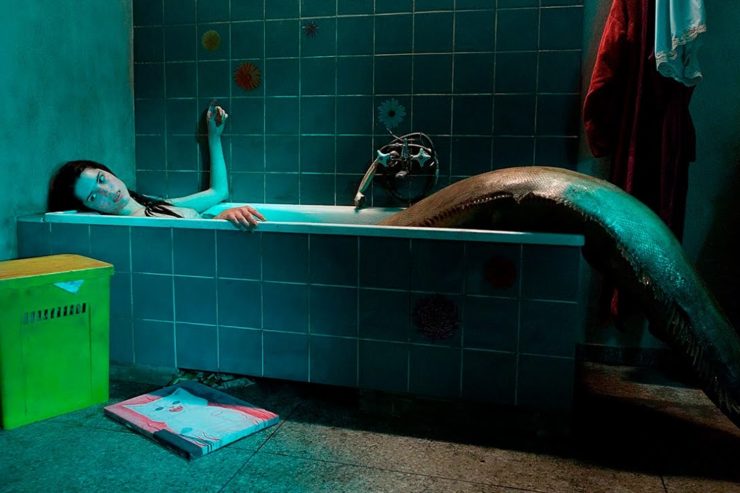 It’s an electro-thump musical of longing and sadness, anchored by a struggle with national identity that spreads the bass of the theatre to the butt of your seat. Taking influence from the mystics of old—as seen in the storybook images through the opening credits—to 90s and early 2000s music videos, The Lure is one of the most seductive starring vehicles for a nonexistent diva duo in years. – Max Kyburz, Brooklyn Magazine

At some point in the 1980s, two teenage mermaids came ashore and started working at a nightclub in Warsaw. So begins this astonishing mermaid musical that merges sex, comedy, death and dance sequences to astonishing effect. Occasionally bloodthirsty and with legs that return to a scaled tail when wet, Silver (Marta Mazurek) and Gold (Michalina Olszanska) become singers as they explore the fantastic kitsch of late communism: Silver falling in love and Gold trying to protect their identity.

The voice is at the heart of the The Little Mermaid: traded for human legs and love, it makes sense to raise the stakes by turning the tale into a musical. This is true of Disney’s version, and this is certainly true of The Lure. But rather than Disney’s anodyne Broadway show tunes, Agnieszka Smoczyńska’s re-imagining turns the fable into an immensely physical work: vulgar, writhing and camp, full of disco and electro-punk and aware of the cost of transformation.

Winner of Special Jury Prize for World Cinema at the 2016 Sundance Film Festival.