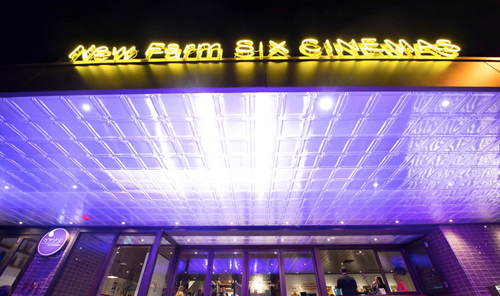 Queensland Film Festival is proud to have the newly refurbished New Farm Six Cinemas as its venue partner in 2016. New Farm Cinemas is a site of enormous historical significance to Brisbane’s film culture. In 1921 it was developed as the Merthyr Picture Palace, in the 1930s it become The Astor which hosted the Brisbane Film Festival, and in the 1970s it was re-developed as The Village Twin, which would become one of Brisbane’s key repertory cinemas. New Farm Cinemas is located in the heart of the New Farm Village Centre, a vibrant inner-city urban renewal precinct known for it’s fine dining restaurants, coffee shops, art deco buildings, and residences.

How to Get Here

Ferry: Catch the City Cat (from any City Cat stop along the river), or the free city hopper ferry (from North Quay) to Sydeny Street Ferry Terminal, New Farm. 10 min walk to our door.

Use the Translink web site to plan your journey http://translink.com.au/

Queensland Film Festival is proud to have the newly refurbished New Farm Six Cinemas as its venue partner in 2016. New Farm Cinemas is a site of enormous historical significance to Brisbane’s film culture.

The history of New Farm Cinemas is the history of cinema exhibition. The site was first developed during the Golden Age of silent cinema in 1921 as the Merthyr Picture Palace. In the 1930s this open-air venue was enclosed and redeveloped for the sound era, and was renamed The Astor. It remained The Astor until the 1970s, when the theatre was again redeveloped, making history as Queensland’s first—and one of Australia’s first—multi-screen cinemas: The Village Twin.

Today’s New Farm Cinemas highlights the venue’s history: its exposed beams are original to the Merthyr Picture Palace, its Art Deco façade is a legacy of The Astor, and the interiors have been restored to their retro-futuristic Village Twin glory.

Queensland Film Festival holds our screenings at New Farm Cinemas for the same reason the Brisbane Film Festival did: a central location, ease of access, the bustling Brunswick Street bars and restaurants, and a state-of-the-art cinema steeped in movie history and lore.